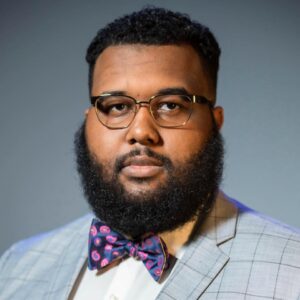 Pastor Reginald Richardson Jr. is an autochthonous citizen of Chicago Illinois and a proud 4th generation Seventh-Day Adventist. He grew up observing the heavy involvement of his parents Elder Reginald Sr. and Sister Helen in service and ministry. This gave way to the seed for sharing the Word being planted.  This early desire to further the Kingdom was nourished by the work of Sr. Pastor Dr. Norman Miles at the Hyde Park SDA Church in Chicago. By age 18, Pastor Richardson was fully cognizant of the calling on his life to tell others about Jesus. He continued his trend of supporting Seventh-Day Adventist education with his attendance by graduating Hinsdale Academy and enrolling at Walla Walla University in Washington State to commence with higher education.  During his one year at Walla Walla, Pastor Richardson was appointed to the position of Lead Student Pastor of the Berean Fellowship Church.

As his year in Washington came to an end, he realized Gods leading hand of the exodus was pointing to a Seventh-Day Adventist HBCU in Huntsville Alabama. He followed God’s direction and made plans to transfer schools. Upon arriving on the hallowed grounds of Oakwood University in the fall of 2016, Pastor Reginald was instantly under the tutelage of ministerial greatness. Wanting to be involved, he discovered areas he could be useful in expeditiously. He made himself available to serve in many facets including assistant to the Religious Vice President, President of Oakwood University Dream, and Head Intern at the Oakwood University Seventh-day Adventist Church under the leadership of Dr. Carlton P. Byrd of Breath of Life ministries.

In the summers between semesters, Pastor Richardson worked diligently to spread the Good News. During these summers He was afforded the opportunity to minister under the guidance of Pastor Dutton at the Sharon Seventh-day Adventist Church in Portland Oregon. He labored alongside other Pastors and Bible workers at camp meetings, evangelistic series, and general community service to show the love of Jesus and bring others into the Fold. Pastor Richardson has had the privilege to baptize 19 souls into the Kingdom. He does not take the awesome responsibility of full-time ministry lightly but realizes the voluminous weight of the task. He has a heart for youth and wants to share the word in a way in which even young children can even understand. Pastor Richardson has a clear goal, and in his own words it is “To complete the great commission and to assist in reconnecting the lost sheep to the Shepard.”